Bill Ringle and Perry Marshall discuss the Pareto Principle – commonly known as the 80/20 Principle – and how small business leaders can use it to fill in the gaps for greater growth.

2:59 How Thomas Edison inspired Perry Marshall to be curious about his environment when he was young, much to the dismay of his parents.

5:29 “People are using this every single day to figure out what gaps exist in their business.”

6:56 The Invisible Money Finder - “If Starbucks has a thousand people a week who buy a five dollar latte, it’s pretty much guaranteed that one of those people will buy a $2700 espresso machine.”

7:34 “People in large numbers are extremely predictable. If they’re not doing what the formula predicts it means they’re doing something wrong.”

8:49 “The Pareto principle has only often been used as a rearview mirror.”

10:14 How to use the 80/20 principle as a metric to determine what is working fine versus what just isn’t.

12:00 “The most interesting thing is, who are the most capable people in the science class, and how much science can they do.”

16:22 “It’s possible to defy the laws of nature, but look how much effort it takes you to do it.”

16:49 “Everything in business is all about outliers.”

18:21 Racking the shotgun, the story of John the gambler,  - “The way you win more poker games is you need to find people who are going to lose.”

21:35 “Sales and marketing is not a convincing people process, it’s an elimination process.”

23:42 “Selling is harnessing natural processes to enable what already wants to happen, to already happen.”

28:16 “Most people just haven’t been given permission to just get rid of the customers.”

29:43 Why most people don’t actually know how to make a business better.

32:25 How to fire someone gracefully.

34:37 “Maybe the reason that you’re struggling is that you’re carrying too heavy of a burden.”

35:50 “Having the wrong person in a position is catastrophic.”

Endorsed by Forbes and INC Magazine, Perry Marshall helps his clients by integrating technology, sales, art and psychology. He founded the $5 million Evolution 2.0 Prize, which aims to solve the biggest mystery in biology.

His reinvention of the Pareto Principle is published in Harvard Business Review. NASA’s Jet Propulsion Labs at the California Institute of Technology use his 80/20 Curve as a productivity tool. His Google AdWords book, Ultimate Guide to Google AdWords, is the world’s best selling book on internet advertising.

He’s consulted in over 300 industries and served as a witness for marketing and Google AdWords litigation. Perry has a degree in Electrical Engineering and lives in Chicago. 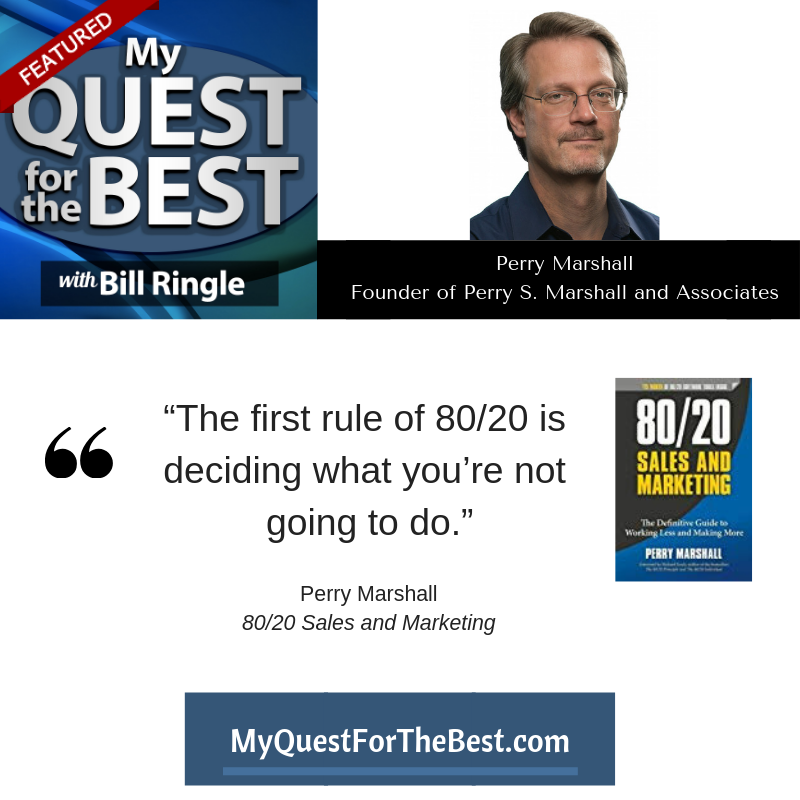