Ajit Mathew George talks with Bill Ringle on My Quest for the Best about his experience with running TEDx Wilmington and how the 410+ TEDx presentations have shaped and improved his life. 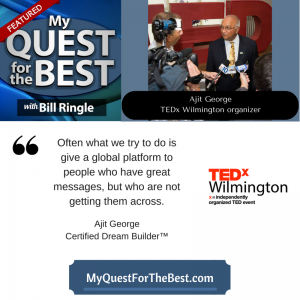 1:51 Ajit tells about growing up in a family where all his cousins were either engineers or doctors and how it made him want to do the opposite. “I wanted to not take a safe route.”

2:50 Ajit recounts the four years he spent in India as a youth working in a children’s league, and how a key leader in the league helped develop his organizational skills.

4:08 “It’s ok to fail…and recovering from failure is almost as important as failing.”

5:33 How Ajit became involved with TED and TEDx

7:00 Ajit gives tips on how to put together a TEDx talk.

7:07 “People feel the need to put everything they know into a talk, which is a huge mistake.”

9:15 [How to resist the urge to condense multiple ideas] – “Write down every idea [you] want to share in a TEDx talk, it doesn’t matter whether it’s one talk or multiple talks. Once [you] write it down on a sheet of paper, I then say, ‘What is the one idea of all those ideas on the sheet of paper you want to share with the world if you never got an opportunity to do a second TEDx talk?’”

10:09 “[TEDx Wilmington] no longer let anyone come without a lot of rehearsal…It’s a very conscious, determined process that we have.”

15:02 What makes a fascinating TED talk.

17:12 “Often what we try to do is give a global platform to people who have great messages, but who are not getting them across.”

19:15 “You can only show them how to walk and give them the directions.”

20:33 “It’s much harder to get people to gracefully surrender something that they passionately believe in.”

21:00 Ajit tells about his upcoming project Second Chances Farm, an organic farm where individuals recently released from prison will have a place to get back on their feet, and the goals he has for its development.

24:43 How Ajit became involved with doing work with Wilmington prisons through the organization Breaking Bread Behind Bars.

25:52 [On hiring individuals recently released from prison] – “There’s a huge shortage of labor force in the United States right now.”

27:50 [The importance of prioritization] – “The key is remembering that there’s no such thing as multi-tasking…so at the end of the day you have to decide if you make a list of 25 things, what’s the one thing that you must do today?”

Ajit is the Chairman of the American Wine Society’s First State Wine Guild. He was also the founder of the MidAtlantic Wine+ Food Festival that in 2015 consisted of a series of 33 acclaimed food and wine events in 4 states over 4 days featuring 60 chefs + 23 winemakers from 6 continents. He organized this annual Wine + Food Festival for 4 years.

Ajit is the founder of Second Chances Farm LLC, which is creating an organic vertical farm in Wilmington, Delaware that will exclusively hire people re-entering society after completing their prison sentence.