Warren Berger, author of The Book of Beautiful Questions

Warren Berger and Bill Ringle discuss the power of asking proper questions and how these powerful questions will help you decide, create, connect, and lead better.

Warren shares how he found himself studying journalism in college. [1:49]

Warren tells the experience of getting his first bio line published. [2:40]

Warren tells how he wrote stories for free because he found passion in them. [3:36]

Warren tells how he transitioned from a journalist to a "questionologist". [4:45]

Not only is questioning a good tool for a journalist, but it's also an amazing tool for innovation. [5:44]

Questions that Warren always asks himself to grow and learn. [9:04]

A favorite question to ask: “What is one thing that I can do that will make everything easier?" [9:26]

Why a mission question is more important than a mission statement. [12:00]

It's good to hang out with a 4-year-old child rather than studying history to learn "how to question." [14:23]

What should the business leader do to audit the quality of the questions you ask regularly. [21:50]

The best way to convey curiosity is to just say " I am curious about something." [27:27]

WARREN BERGER developed his inquiry skills as a journalist for The New York Times but first declared himself a “questionologist” with the 2014 publication of his best-selling book, A MORE BEAUTIFUL QUESTION. The book shows that questioning has been the starting point of everything from the cell phone, to Netflix, to the International Red Cross.

In the book, Warren introduces an original framework (the “Why/What If/How” cycle of inquiry) that can be applied to challenges and problems. A More Beautiful Question has been embraced by the NASA space program, the National Science Foundation, companies such as Starbucks, Chanel, Oracle, and Pepsi, as well as by major universities around the country.

Warren has keynoted at the DesignThinkers Conference in Toronto and the International Women’s Conference in Rome. He also regularly visits elementary and high schools around the country, urging teachers to try to encourage more questioning in the classroom.

In the fall of 2018, Warren released a follow-up book on questioning, THE BOOK OF BEAUTIFUL QUESTIONS: The Powerful Questions That Will Help You Decide, Create, Connect, and Lead.

In addition to authoring eight books (including the acclaimed GLIMMER, one of the first books on “design thinking”), Warren has appeared on NPR’s All Things Considered, CNN, and NBC’s Today Show, and he contributes regularly to Harvard Business Review, Fast Company, and Psychology Today, where he writes the “Questionologist” column. 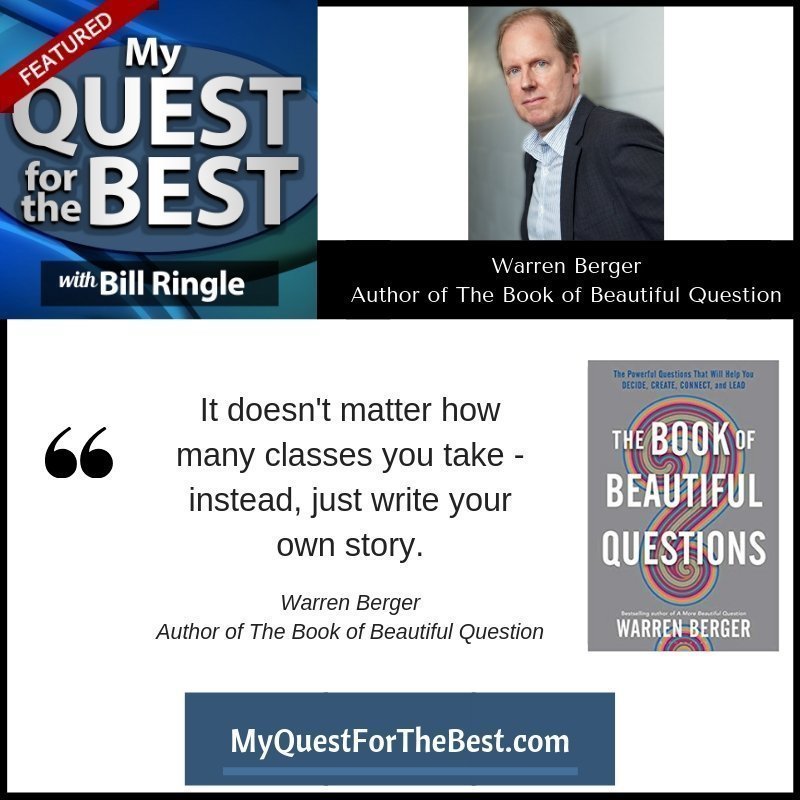 Here is the special offer that Warren referenced during the interview just for our listeners – a special list of:

10 questions to help you be a more effective leader

Thanks so much, Warren!