Dan Rust and Bill Ringle discuss the game beneath the game – understanding the culture and maximizing your chances for success – known as workplace poker.

1:45 How Dan’s father, a Sargent-Major in the U.S. Army who grew up in North Dakotan coal-mining country, inspired him to rise out of one environment and build a life better than the one he knew.

4:36 “How often in your world of work have you ever experienced a situation where someone who didn’t necessarily deserve credit got credit for a project that turned out pretty well?”

5:10 “How often does the world of work seem a little arbitrary and crazy to you?” - the Answer, too often.

5:54 “Human beings are, in their own way, arbitrary, crazy people, and as much as we want to believe we are all sentient, logical people and the workplace is a meritocracy, it’s not. The workplace is driven by imperfect beings.”

7:39 “I was always that person in school who thought first before I spoke.”

8:40 “There’s so much communication that occurs beneath the surface.”

10:09 Smartphones make it incredibly difficult to listen and communicate in a deep manner.

11:20 The majority of the stories in Dan’s are other people’s stories, except for the story of Tony. - “I was absolutely flabbergasted.”

14:09 Why connecting with people is so important, and how you can be more like Tony and recognize what to pay attention to.

15:40 “The times when I had been best at reading the room are the times in which I was emotionally disengaged.”

15:54 “The more emotionally engaged you are, the less you are able to truly read them from an objective standpoint.”

18:09 The worst hiring mistake that Dan ever made in his life, and why friendships and emotional connection can cause problems at work.

19:43 “In Workplace Poker we acknowledge we’re all humans, we’re imperfect.”

21:41 “People aren’t going to be as transparent with you if you have some degree of power over them.”

24:00 Case study of Vivic Corps and client distribution among senior brokers, and why Darwinian ethics of feeding off the lower tiers of the business doesn’t help company culture.

29:41 The importance of likability and why it matters so much in business. - “Men can get farther in their career by being pushy and obnoxious because many people will simply get out of their way.”

30:32 “There comes a point in every career where being an abrasive hammer doesn’t bring about the same results as it initially produces.”

31:00 “Likability, charm, connecting with other people – you can still be a driver, someone who drives performances - but if you can do it with a degree of charm and likability you’re going to do it so much better.”

36:26 Case study of a company with internal challenges, and how Dan was able to come in and get the projects back on track.

Dan Rust is the founder of Frontline Learning, an international publisher of corporate training resources. His award-winning keynote speeches and workshops focus on employee engagement, productivity and career management. For more than 20 years Dan has been writing and speaking on a variety of career management topics. His blog at workplacepoker.com focuses on ideas, skills and practical strategies to help you accelerate your career trajectory. His corporate training clients have included GE, Apple, Starbucks, Saudi Aramco and Disney Interactive. 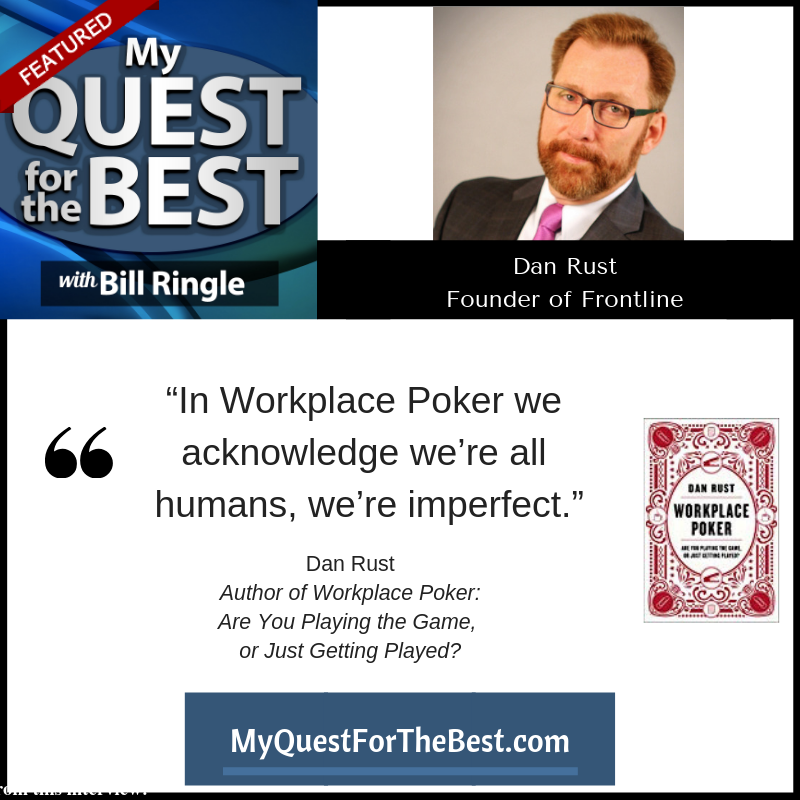